On November 9, 2019, the Members of Cassiopeia Triangle #202 will be welcoming home Miss Megan Henderson who was the State Representative for the Organization of Triangles Inc.
Megan traveled all over the State sharing her message of being the change the world needs and raising money for the Western New York Foundation of Suicide Prevention. She has been a proud member of 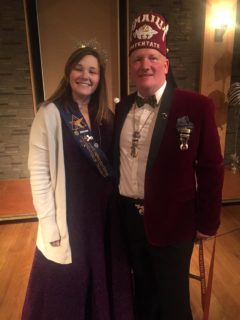 Cassiopeia Triangle since she was 10 years old. Megan has served as the Beloved Queen of Cassiopeia Triangle, as well as Junior Advisor for four years. Megan has received the Order of the Deborah, and helped create the Socium Award for the Organization. In January, Megan will be leaving to attend bootcamp. She is fulfilling her dream of becoming a Marine.

Please join Cassiopeia Triangle #202 on November 9, 2019 as we welcome Megan back home.

Majority Degree begins at 4pm. Dinner at 5:30pm and her homecoming at 7:00pm.

Please contact Miss Christine Whipkey at cassiopeiatriangle [at] gmail [dot] com if you would like to attend!